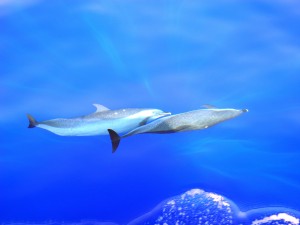 For families traveling to Kona, consider a combo trip.  Boarding Fire Hatt and heading to Captain Cook for a morning Snorkel and then heading out for the fabled Marlin Fishing in Kona gives opportunity for the entire family to enjoy their passion.  Pictured to left is an example of what Peter and Patricia Baio witnessed while visiting here in Kona.  Peter is a big game hunting enthusiast with vast experience in fishing and hunting around the world.  His dream is to catch a trophy Marlin in Kona.

Fire Hatt is offering 20% off in June for Kona fishing charters!
On the following dates, receive 20% off of our regular rates!

This promotion is available for new bookings on fishing charters on a first come, first serve basis. Please feel free to forward this promotion to your friends and family. To be the first to find out about last minute specials on Kona fishing charters, please subscribe to our newsletter.

Also, please mention the “20% Off Last Minute Special” when you book.

Peter Baio and his wife Patty boarded Fire Hatt on day one for the start of a three day Kona marlin fishing adventure. Targeting a big blue marlin, we set out. This was a beautiful flat day on the water. We encountered pilot whales, porpoise, birds and lots of flying fish but no marlin! However, the porpoise show today was the best I have seen to date. The water was crystal clear as you can see in the photo above. If you can’t swim with the Porpoise, cruising with them is the next best thing.

After the second day into his Kona marlin fishing adventure we are still on the water and no marlin bites, we are getting frustrated. A few marlin have been reported caught or released, so we feel that there is still hope for us, but by the end of the day, there were no fish for Peter.

On day three, after announcing to Peter we released a marlin the day before, we have renewed faith that today is his day. Clad in his lucky yellow shirt and Denver Nuggets cap, we head out. We are bit! A double, lines screaming, Peter grabs a rod and gets  into the chair. One fish comes undone and the other is a nice shortbill spearfish. Not the marlin we hoped for, but a prize anyway. Lines out again and now we have a marlin up in the pattern. He strikes the short rigger, takes a little line and is gone. We circled back to try to coax the fish in and we hook a nice skipjack instead.  (This explains why the marlin was there.)  To no avail, we head back out for the hunt.  Another marlin swims into the pattern slashing at the long corner bait, again does not take it? Who is teasing who? At the end of the day, Peter does have a nice spearfish and plans to return for another shot at a big blue marlin.

Debbie and Jack Cupples along with friends Shannon and Mark Johnson enjoyed a stress free day aboard the Fire Hatt. The day started with an ono run to Captain Cook Bay, near Kona, for a morning snorkeling tour. (One ono was caught and involuntarily released along the way.) Being the first boat to arrive this day, the group had the entire bay to go snorkeling by themselves. After a leisurely snorkel, we loaded up and headed out for a big fish. Around 2:00pm, a nice big blue marlin hit while it was Debbie’s turn in the chair. While getting the rod to her, I told her “This is the real deal”. With wide eyes and a big smile, Debbie began to wind.  Forty five minutes later after a fantastic display by the marlin and the other guests having a turn in the chair, the marlin was released. Good thing the world didn’t come to an end, who would they get to tell their story to?

Fun, Fun, Fun! I know most of you will not get the pleasure of fishing in Kona with this group. Words can’t describe how much fun they were. At one point we were entertained by Doug Casady with a guitar number to try to raise a fish. No monster fish were caught.  One mystery fish was lost one ono caught. Lisa Tallman (right) works and giggles as she is fighting the mystery fish that came off  just minutes into the fight. Her sister-in-law, Mary Casady hooked into a 30lb ono and brought it to the boat as her husband Doug encouraged her on! Great team effort!  I go with lady luck any day. Mary’s ono is featured in center photo and we look forward to more fishing in Kona with them. 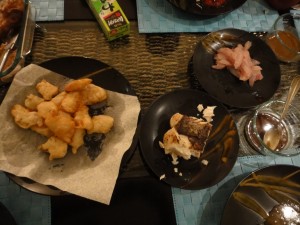 Our guests Peter and Jenny sent this photo of the Ono Feast they prepared after their day aboard the Fire Hatt.  Jenny prepared the Ono 3-ways. Battered, baked, and sashimi style.  This looks fabulous!  You can almost taste it.  If the recipes are shared with me, I will pass them along.  The family sent us a wonderful thank you stating  “You are absolutely the best with your customer service and professionalism.  Even if we would have been skunked, we would have still felt the same!”  We are so proud.

Peter and his family,  including his young Grandson Scout, boarded the Fire Hatt with such enthusiasm.  We were bound to hook up something today.  Fishing had been a little slow, a few Mahi Mahi and a few Ono being reported along with a few nice Marlin in the past week.  We put out our Ono rigs and headed out to “Ono Lane” (40 fa) and hoped for a strike.  Nothing!  Not even a knockdown.  We changed out rigs and headed to deeper water.  Hoping for a Spearfish or Marlin.  Nothing.  Young  Scout waited beside a rod that was designated as his.  Again nothing.  Finally we headed back to Ono Lane, changed the rigs back and we are bit!  Peter brought the fish to the boat in just minutes.  Sometimes when you want a fish so bad for a guest it seems impossible to get one.  This time it payed off.   After packaging fish for them to take back to their condo, Peter’s wife Jenny prepared the Ono 3-ways.  Battered, baked, and sashimi style. It was delicious. 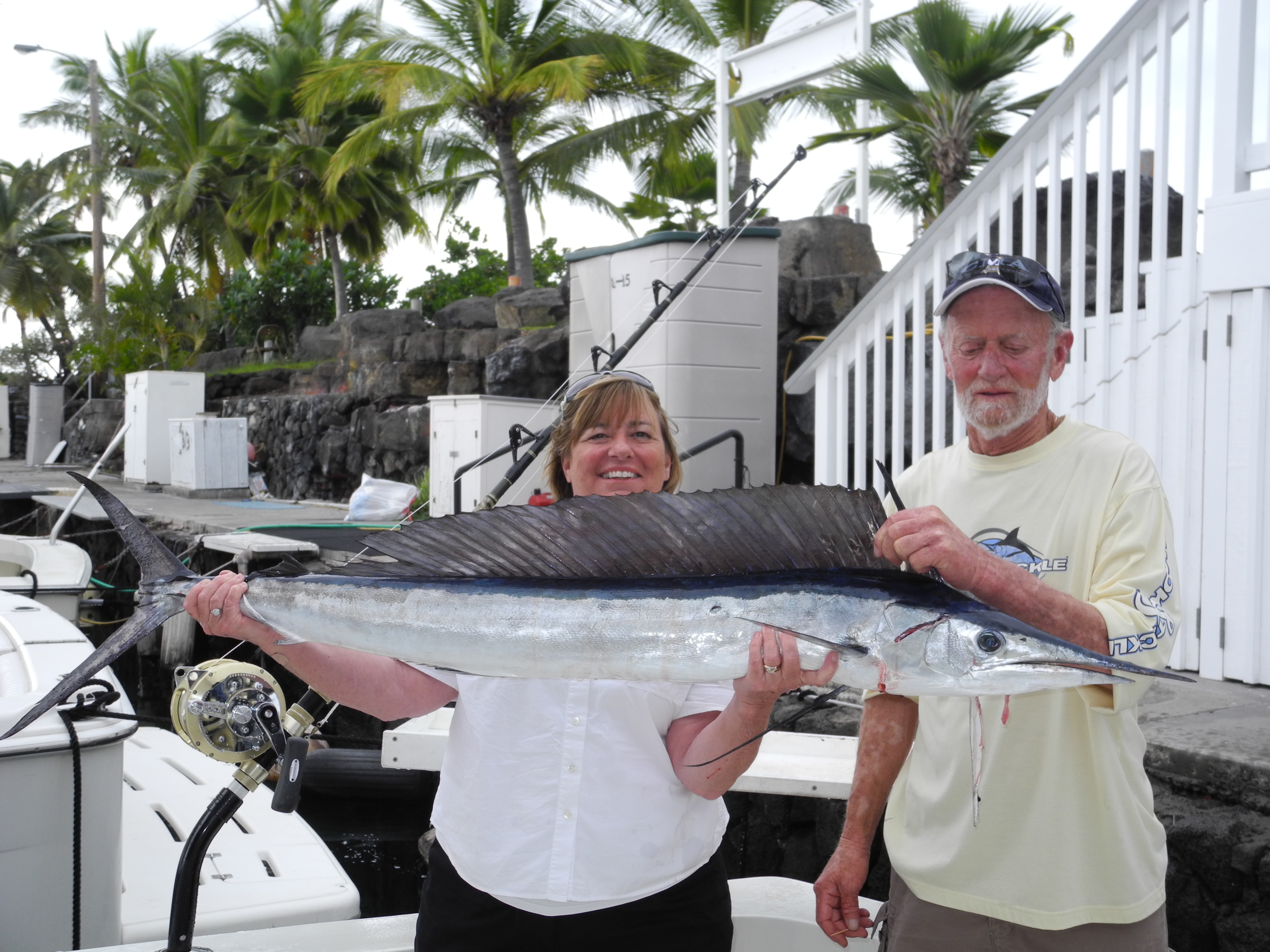 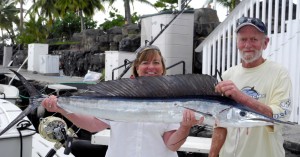 E J and Johnny Vaughn, longtime Huntington Harbour, CA residents and fishermen spent the day aboard the Fire Hatt in Kona, Hawaii, for a day of fishing.  They entered the local “Dirty Dozen” tournament held the first Saturday of each month.  With much anticipation, we blasted off the starting line after Start Fishing was announced.  Johnny told us E J would be the first angler.  He wanted her to catch her first Marlin.  After the “chair talk”, E J was wide eyed and anxious as we waited for the line to scream.  During that time we listened to the radio as two boats hooked up.  Top Shape boated a 301 lb Blue Marlin and JR’s Hooker boated a 458 lb Blue Marlin to take the lead. Then the stinger line was hit!  E J hopped in the chair and brought in her catch, while not a prize Blue Marlin we were hoping for, it was still her first billfish.  Look at her smile, I think she was happy with her catch.  After getting back to the harbor and taking photos, we started cleaning and packaging her fish.  We always look in the stomach to see what the fish are eating…. we found a tiny Marlin!  E J quickly pointed out that she really had a double…. hard to argue.