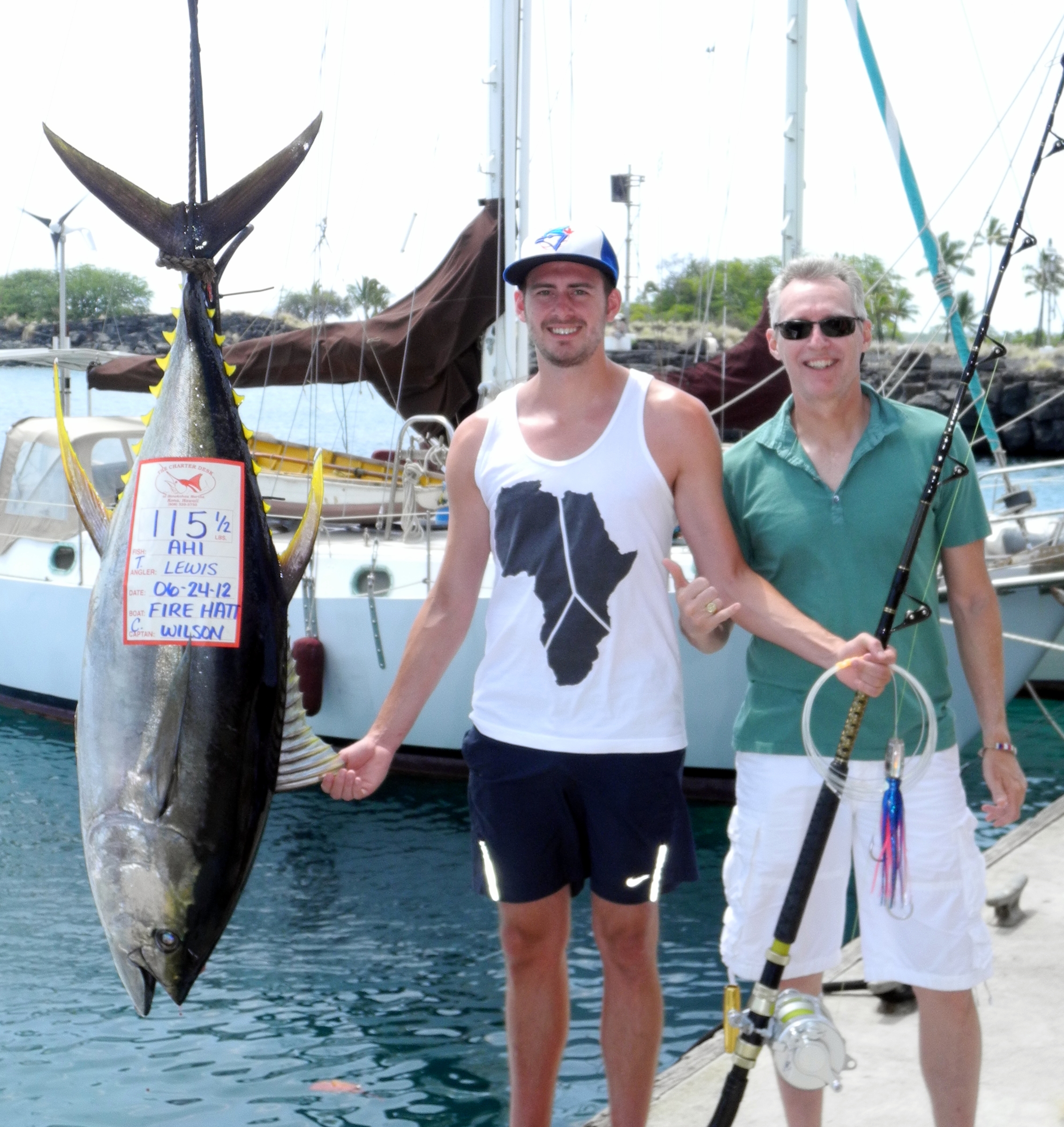 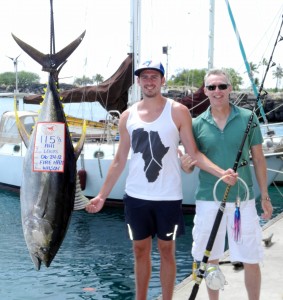 Yellowfin Tuna Are Here In Numbers.  John Lewis and his Son, Tim visiting the Big Island from Pasadena, CA  just wanted to catch something bigger than the 4 pound Trout that currently holds the family record.  As avid fly fishermen, they know the trials of getting a fish.  Today, we are hearing of Tuna “boiling”  in several different areas.  We headed to an area where there was some action and were lucky enough to hook one.  This did not come early in the day.  After the father and son duo had a nice continental breakfast followed by a short nap and then a little lunch followed by another short nap, we were headed back from “F” Buoy in about 1100 fathoms when I saw two white birds circle and crash in front of us.  A sure sign that something is below the surface.  About that time, Tuna boiled up and as I was making a pass through them, I told John and Tim to get ready!  As they were getting off the bridge, the short rigger is bit!  We are Hooked Up!  Tim is in the chair and brings his 115.5 lb Yellowfin tuna to the boat.  The Yellowfin Tuna was caught on a Ken Matsuura 50# reel.  Did I mention it took the “Lucky Linda” lure by Bomboy Lures?  The 4 lb family record for Trout has been shattered!

Ono Becomes Last Minute Delight for Brothers Rob and Ron along with their Dad Robert and his twin Brother Ron.  No kidding, all we had to remember was two names.  The day started with the usual anticipation.  We headed out of the Harbor with offshore lures in the water hoping for Tuna, Mahi Mahi, Shortbill Spearfish or Marlin.  These guys wanted a fish!  Period!  As mid morning arrived and no bite for us yet, the mood was changing along with the lures.  Still no bite.  There was a tournament going on and we were listening to the radio chatter.  Or lack of radio chatter.  Turns out, there just wasn’t any fish being caught.  Although, we had fun not catching!  These guys bantered back and forth with Adam, Linda and I all day.  They even joked about wanting to know the best place to buy fish.  Now the lures are being changed out again and we are headed in to “Ono Lane”.   We are still putting out the lures and we are Hooked Up!  (Never so happy to hear a line scream!)  Earlier in the day, Adam had spotted a lure we had not run before.  He rigged it up and had it ready for the afternoon Ono run.  This is the lure that got bit within a few minutes of being set.  We appropriately named it “Yummy“.  Robert Sr. is in the chair and fighting his fish.  After a short fight he had the fish to the boat.  Dinner Tonight!  As you can imagine, the mood quickly changes.  Smiles all around. 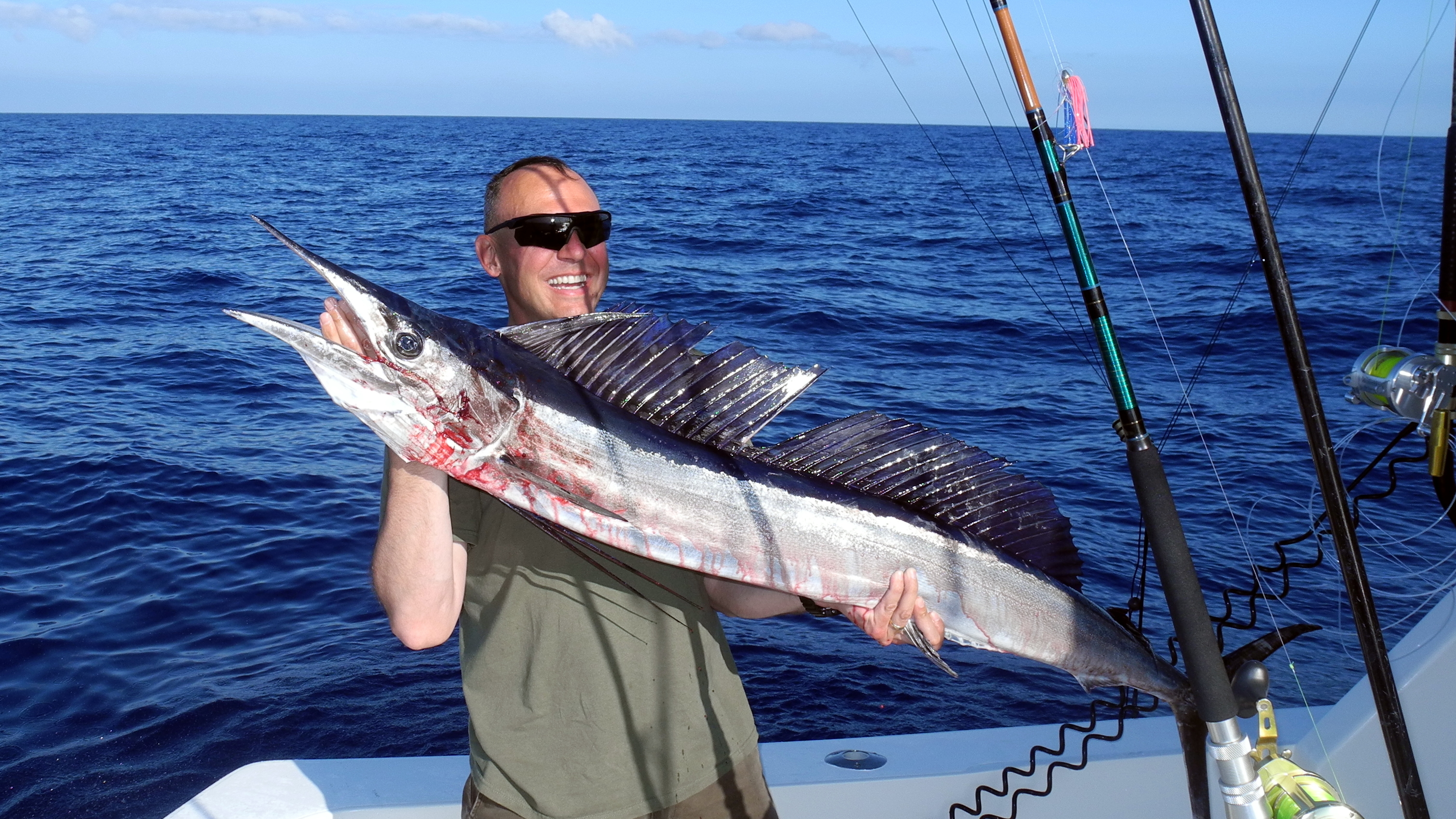 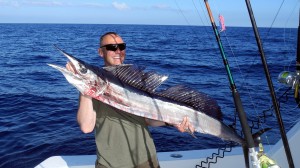 Fishing From One Extreme to Another is not a challenge for Mark and his family from Fairbanks Alaska.  It is an adventure.  Mark, his wife and daughters are on a return trip to fish Kona Hawaii on Fire Hatt.  Last time around Mark brought in a few small Tunas.  This time around it was a nice Shortbill Spearfish…. next time he is wanting a nice Big Blue Marlin.  Mark and his family are avid fishermen/ladies in their home state with numerous Salmon over 20 lbs and many, many Halibut.  The largest Halibut weighing in at over 50lbs on light tackle… As I looked at the photos proudly presented on their camera I couldn’t help but comment on how many layers of clothing they were wearing and how happy they looked fishing in the bitter cold!  As they are putting aloe on this weeks sunburns they are thinking how much they don’t want to leave the beautiful tropical sun behind.  Actually, they have another day booked to fish before they head home. Mark really wants a Blue Marlin, I Hope the Fish Gods are listening.