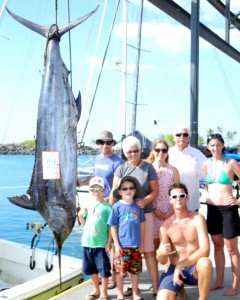 One of My favorite Family Fishing Stories.  This family of six including two young Sons and their Grandmother from Canada wanted to snorkel and fish.  So, we headed out to do just that.  On the way down to Captain Cook Bay to Snorkel we saw Pilot Whales and Porpoise.  Everyone aboard marveled and took photos of the spectacular sight.  even though we are on our way to snorkel, we do have have five lines in the water hoping for a bite.  However, not a single nibble was had on the way down.  With all the guests in the water enjoying a mid morning snorkel and swim in the pristine bay, Adam and I are planning our strategy for the return trip back to the harbor.  I decide to head out to the 1000 fathom line and try our luck on the outside.  As I approached the area, I turned north and headed up the coast.  Then as anticipated, the long corner line is bit.  We are hooked up!  In the chair is Grandma, 63 year old Donna Stewart is now fighting her fish of a lifetime!  With help and encouragement from her son Eian, they sucessfully land the beautiful Pacific Blue Marlin.  I tagged the fish and as we are attempting to release it when we see that it is not going to live.   As we get the marlin secure in the cockpit of the boat,  Eian’s wife yells out SHARK!   With cameras snapping shots of the shark, we realize that would have been the Marlins fate in the end if we had released it injured.   We bring Donna’s fish to the scale and are pleased with the 444 pound weight.  What a memorable day.