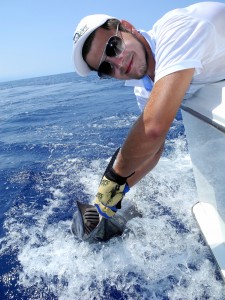 Blue Marlin Release for Romania Family fishing in Kona.  When Octavian Mardarasevici and his family boarded Fire Hatt today they had hopes of just catching anything.  What happened next turned into a true Family Fishing Adventure in Kona.  We went almost the whole day without a single bite.  Octavian being the angler today, paced the deck, got in and out of the fighting chair a few times and helped scan the horizon all day just looking for a sign.  Then finally, the Blue Marlin bite we had been waiting for came.  The fish came in on the long corner and devoured a Crampton lure.  We are Hooked Up!  The fish went straight down and did not surface until a lot of line was retrieved.  We thought maybe a tuna?  Then as the line started to come to the surface the marlin came exploding out of the water and put on quite a show!  Octavian fought the fish on a 50lb Matsuura reel for just under 40 minutes.  Once the fish was leadered, tagged and secured beside the boat, Mike Fir and Linda was able to get Octavian out of the fighting chair and encouraged him to take the Marlin by the bill and start to revive it.  In just a short time the fish was kicking and Octavian released it.  Just watching the expression on Octavian’s face when it was over reminds me of what we take for granted in this sport.  Having reeled in a fish and then putting your hands on it to revive and release it is the most satisfying experience a fisherman can participate in.  A true Kona Family Fishing Experience. 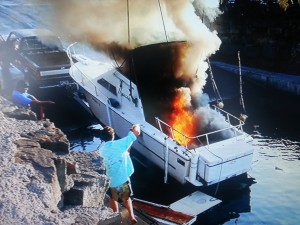 A fire ignited by an engine compartment explosion damaged a sportfishing vessel Saturday morning at Honokohau Marina and Small Boat Harbor in North Kona, according to the Hawaii Fire Department. No injuries were reported.

The boat, identified through photos submitted to West Hawaii Today, was within the harbor’s boat launch ramp when the reported explosion occurred about 7 a.m., according to the fire department. Bystanders, including other boaters, had put out the blaze using fire extinguishers prior to arrival of firefighters based out of the Kailua Fire Station.

Chuck Wilson, captain of the vessel Fire Hatt, and a Retired Fire Chief Officer reported that his deckhand, Adam Ludwig, used two of their boat’s fire extinguishers to snuff the blaze. Wilson also stated that a man, identified as the boat’s owner, was able to flee the boat without injury. His sons were near the vehicle when the explosion occurred; neither was injured.

Featured in the photo is First Mate Adam Ludwig from the Vessel FIRE HATT extinguishing the blaze.