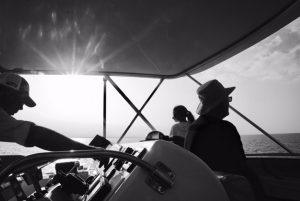 Beautiful Morning Sunrise aboard Fire Hatt with the Kelln and Dwyer Families, Waiting for the Mahi Mahi bite!

Serena and Steven Kelln, Steven’s dad, Elton, and their (soon to be 6 year old) son, Gavin along with  brother in law, David Dwyer and his daughter, Sarah spent the day on a family fishing trip here in Kona Hawaii and had the privilege and wonderful experience of heading out on the water with Captain Joe Shumaker and Captain Brian Shumaker on a gorgeous morning in March.  Sightings of dolphins on the way out of the harbor were amazing and the beautiful blue sky and calm water made for a relaxing and wonderful experience.  The first couple hours of their trip passed uneventfully without a nibble but the newness of being on a boat kept 5 year old Gavin entertained and excited to be out.  They all just enjoyed the beauty of the water and the friendly company of the Captains.  This was an extended family fishing trip but also the unique opportunity to fulfill the exceptionally special birthday request of Gavin’s, to be able to fish for the very first time for his upcoming 6th birthday.  Then, within the last half hour of their trip, we had two strikes! We are Hooked Up!  Gavin and his Dad had the thrill of a lifetime hauling in a beautiful Mahi Mahi together.  Gavin had a bout of shyness and didn’t get a picture with the Mahi Mahi but Steven happily stepped in and took his place.  Although there was little action on the first part of the trip it was absolutely chalked full of firsts and amazing memories that they will all look back on with such incredible fondness.  Thank you Kelln’s and Dwyer’s for your great spirit and friendliness, we are looking forward to seeing you folks again in the future!    #familyfishinginkonahawaii 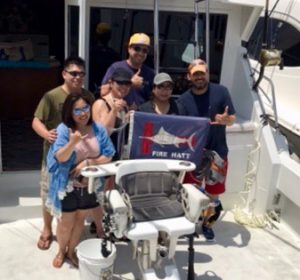 From Two Pound Bass to 200 Pound Blue Marlin.  Today on Fire Hatt, Daniel Perez broke his personal all time record for the largest fish he has ever caught, (a two pound Bass). This estimated 200 pound Pacific Blue Marlin will give him bragging rights for a very long time. Daniel brought the beauty to the boat in just under 20 minutes. The Marlin was tagged and released, tired but unharmed by Captain Joe Shumaker. Nice!  Daniel is from the Bay Area of Northern California.  Fire Hatt was in about 1200 fathoms just outside the Honokohau Harbor Marina when the fish exploded on the short bait.  Captain Joe Shumaker likes to run the well known “Smash Bait” in tight close to the boat…for this reason!  The Big Blue jumped at least fifty times and tired itself out giving Daniel the upper hand.

Scientific name: Makaira nigricans.  The blue marlin is the largest of the marlins, common to 11 feet, and known to exceed 2,000 pounds. It is cobalt blue on top shading to silvery white on bottom, although colors can vary by region.   In common with striped marlin, they are rarely encountered in shallow nearshore waters, preferring blue, oceanic waters.

Tag and recapture data show that blue marlin travel long distances and routinely make trans-Pacific or trans-Atlantic crossings.  One recent tag return indicates the first inter-ocean for a blue marlin  that earlier data on genetics suggested occurred). In the Pacific, blue marlin tagged in Kona, Hawaii have been recaptured in the South China Sea, in the Marquesas, and off the western coast of South America Some of these movements have occurred in relatively short time scales.

In August of 1997 a pilot project was undertaken on blue marlin in Pacific waters off the coast of Kona, Hawaii.   In this project the first generation pop-up satellite tags were set for durations of 60-90 days and fish ranged in body size between 130 and 300 lbs.   Three of the tags successfully surfaced and transmitted data, and one fish was caught within a week after release within a mile of the initial tag and release event. Remarkably, one blue marlin traveled from Hawaii to an area west of the Galapagos (a distance of approximately 3000 nm) in 90 days. At the time people doubted a marlin from Hawaii could travel this far. The remaining five tagged blue marlin did not report back for unknown reasons, possibly tag failure due to antenna interaction with the fish or mortality. The tagging data provided a short term view that was consistent with the acoustic tagging data- marlin were primarily fish of the surface 50m but occasionally dove to deeper depths. 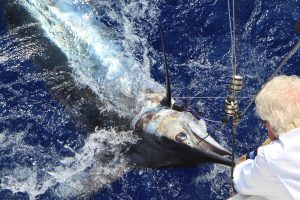 It’s that time of year when our Charter boat FIRE HATT has booked some Tournaments here in Kona Hawaii, and we still have some tournament openings.  A couple of high stakes tournaments are completely open and we are looking for one angler to team up with another angler for the Big Island Marlin Tournament, August  24-25-26, a three fishing day tournament and typically large payout.

We are also wide open for the first tournament of the season, The Rock ‘n Reel Tournament on June 10 and 11.

These high stakes and high adventure events can instantly change your fortune.  Check out our website firehattsportfishing.com to see who we are and also Hawaii Marlin Tournament Series to see details of all events.