Father and Son Tag Team Releases 500+ lb Blue Marlin.  As the Froehlich Family boarded the Boat it was evident that the avid fisherman of the group was Mike’s son, Cole.  Dad and the family was along for the ride.  Cole’s largest fish to date is a 20 lb freshwater species.  The family had never been fishing in Kona Hawaii.  Once we left the harbor for todays adventure we had Cole in the fighting chair giving him the rundown on the do’s and don’ts on bringing in these fish.  Now the morning had passed without a single bite.  It was starting to weigh on all of us.  As we cruised in the warm tropical sun, lures had been changed out, we changed depths and direction, still nothing.  Then we made the turn and headed back to the harbor.  As we passed another boat that is skippered by Lure Maker Bomboy Llanes the short corner lure just exploded! We are hooked up!  A big Blue Marlin hit a “One on One” lure ironically made by Bomboy!  Karma!  The fish jumped 6 ft out of the water and put on quite a show.  Cole is in the fighting chair giving it all he has when shortly into the fight it is evident that he needs a little help.  Dad steps up and helps bring in the fish.  Earlier I had explained to our guests that the fish here, especially the Blue Marlin are “World Class Athletes” and are difficult to stop.  It is not uncommon for more than one angler to take a turn at fighting the fish of a life time.  This is a prime example of the sheer strength of the Blue Marlin.  After a 53 minute fight on a custom 50lb Marsuura Reel, Mike has the fish to the boat and Adam quickly grabs the leader and gently brings the fish to the side.  It was another textbook tag and release.  The fish is tired but is revived and swims away.  The wonderful memories shared by this Father and Son Tag Team duo hopefully will be remembered and shared for a lifetime. After all, It was Cole that was at the helm with me being given an opportunity to see what it was like to steer a boat when the fish hit.

Another Perfect Day of Fishing in Kona Hawaii 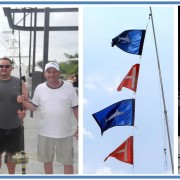 The Ono Are Here In Numbers