You are here: Home / Your Kona Fishing Captain 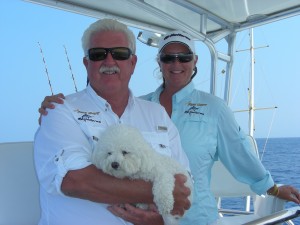 The owner and operator of FIRE HATT Sportfishing Charters in the beautiful paradise of Kona, Hawaii invites you and your family to join him for a spectacular day of big game fishing for our fabled Blue Marlin, Ono, Ahi and Spearfish.

Captain Chuck Wilson has been fishing for over 40 years in California, Mexico, Cabo San Lucas, Texas and Hawaii. As a Chief Fire Officer and Captain of a beautiful, pristine world class 43′ Hatteras Convertible, he has a passion for fishing and being on the ocean.

Chuck and his wife, Linda have been featured aboard the FIRE HATT on ESPN, OLN, and the VERSUS Television Show “Shark Hunters” and “Shark Hunters, East vs West” for their tournament winning ability. Together they have won over a dozen tournaments including the “Zane Grey” which is the largest Marlin Tournament on the West Coast of the US. In 2013 Chuck and Linda landed a 1058 lb. giant blue marlin and became member’s of the World Grander Club, celebrating the catching of a marlin weighing over 1000 lbs.

Chuck having a lifelong commitment to customer service as a teacher will provide for a great charter experience and ultimate satisfaction to the clients. We look forward to having you aboard for your vacation in paradise.

Read about Chuck’s adventures in the Captain’s Blog.

FROM THE CAPTAIN’S BLOG