Captain Chuck Wilson (not pictured above) of FIRE HATT wrote an article for the April 2011 issue of Coastal Angler Magazine about the effects of the Asia Pacific Tsunami that reached the Kona Hawaii shores. Chuck is a regular contributor to the magazine and we will be featuring more of his articles right here on this blog. Read the article online.

Last Sunday FIRE HATT appeared in the TV show “Hawai’i Goes Fishing” in a segment called Beginners Luck on the Oceanic Time Warner Cable network. We don’t want to spoil the content of the videos, but they didn’t title the segment Beginner’s Luck for nothing! Be sure to watch both videos to get a real taste of what fishing on FIRE HATT is really like! 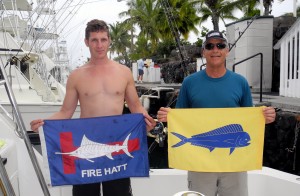 Jim Williams brought his family back for a second fishing adventure aboard FIRE HATT.  Zachery Williams, Jim’s son,  caught and released a Striped Marlin after a short battle that he caught on the new weapon in the arsenal, the Lucky Linda Lure, that was made for her by Bomboy.  Jim also brought along Marty Raphael and his wife Susan.  Marty is a career U.S. Forest service man who is involved protecting endangered species in the state of Washington.  Marty  caught dinner for them all with a nice Mahi that was brought home.  It was one of those early spring days in Kona with 84 degree air temp and the water was 79. 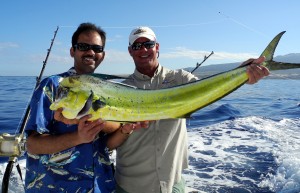 Gandhi Balakrishnan and his family anxiously boarded Fire Hatt with the anticipation of getting something larger than the family record Salmon caught by Gandhi in WA where they live.  We had just finished setting the lines and the long corner was bit!  We had not even given the “Chair Talk”  to Gandhi yet.  Gandhi jumped in the chair and had the Mahi to the boat in a matter of seconds.  After putting the lines back in the water we joked with Gandhi about the fish patterns on his shirt,  Mahi, Tuna, Marlin and Sailfish.  We joked about getting the Mahi and now we can concentrate on the others, when the line went off again.  This time a nice Blue Marlin about 300 pounds was screaming across the water.  Again Gandhi jumps in the chair to begin his fight for the trophy he really wanted only to have the fish come undone!  What a thrill it was for him and his family.  At the end of the day, one Mahi and one Marlin strike.  We encouraged him to keep the shirt and we will work on the rest of the species next time.