Honored as the Top Performing SPORTFISHING CHARTER BOAT IN Kailua Kona, Hawaii as Reviewed by Travelers on the World’s Largest Travel Site 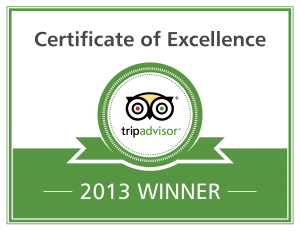 KAILUA KONA, HAWAII – JUNE 25, 2013 – FIRE HATT SPORTFISHING CHARTERS today announced that it has received a TripAdvisor® Certificate of Excellence award. The accolade, which honors hospitality excellence, is given only to establishments that consistently achieve outstanding traveler reviews on TripAdvisor, and is extended to qualifying businesses worldwide. Only the top-performing 10 percent of businesses listed on TripAdvisor receive this prestigious award.

To qualify for a Certificate of Excellence, businesses must maintain an overall rating of four or higher, out of a possible five, as reviewed by travelers on TripAdvisor, and must have been listed on TripAdvisor for at least 12 months. Additional criteria include the volume of reviews received within the last 12 months.

“FIRE HATT SPORTFISHING CHARTERS is pleased to receive a TripAdvisor Certificate of Excellence,” said Captain Chuck Wilson/Owner and Operator of FIRE HATT SPORTFISHING. “We strive to offer our customers a memorable experience, and this accolade is evidence that our hard work is translating into positive reviews on TripAdvisor.  We are very proud for Fire Hatt Sportfishing to be  Awarded this Certificate of Excellence Award.”

“TripAdvisor is delighted to celebrate the success of businesses around the globe, from Sydney to Chicago, Sao Paulo to Rome, which are consistently offering TripAdvisor travelers a great customer experience,” said Alison Copus, Vice President of Marketing for TripAdvisor for Business. “The Certificate of Excellence award provides top performing establishments around the world the recognition they deserve, based on feedback from those who matter most – their customers.” 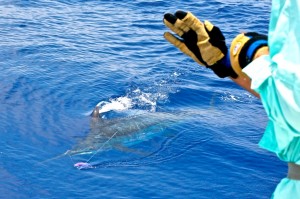 Justin and Lenora Hunter are completing a full year of traveling around the world with their two sons.  Fishing in Kona Hawaii is one of their last trips before heading to Alaska.   9 year old Aidan and 12 year old Zach are experiencing opportunities of a life time while getting to fish in places like South Africa and various other destinations in the South Pacific.  Having caught some impressive fish along the way, they could only dream about hooking a Pacific Blue Marlin.  They Did!  We left the harbor at 7:00 am for a 3/4 day charter and headed South towards Captain Cook.  They enjoyed a beautiful snorkel in the bay and anxiously got back to the boat to continue the quest.  So far we did not even get a bite.  The boys are begining to look at Me and Adam and Mom and Dad giving the “Where’s the fish?” look. No pressure there… On our way back up the line just after noon, the long rigger line is bit and line is screaming!  The Ice Blue Lucky Linda Lure comes through for us again, we are Hooked Up!  It is a Blue Marlin and 9 year old Aidan is in the chair.  With lines cleared and Adam at his side, the battle begins.  I was so amazed at the tenacity of this young man!  He fought sooo hard.  After about fifteen minutes Aidan gave his older brother Zach an opportunity in the chair.  Knowing this was Aidan’s fish, Zach lets Aidan back in the chair to finish the fight.  This fish was to the boat quickly, we had it to leader two times and had to let go. On the third try we were able to successfully get the hook out and release a nice healthy fiesty Pacific Blue Marlin.  We estimated Aidan’s fish to be about 400 pounds.  This crushes the family record Marlin held by Aidan’s Grandfather, a 300+ pounder.  I think the bar has been set quite high for Zach now!

Featured in photo above is Adam Ludwig with Aidan’s Pacific Blue Marlin to leader wearing AFTCO Release Gloves.  The Lucky Linda Lure is by Bomboy Lures.

This is a message from Justin Hunter regarding his trip with me recently.  It has become something I reflect on quite often now and wanted to share it with you: