Today we set out on a Kona fishing trip with a couple of Canadians!

Fifteen minutes after leaving the harbor a 425 lb Blue Marlin hit the short corner bait and exploded in the air while everyone on the boat was watching the lures! The fish put on a spectacular aerial show .  James McKeachie from BC Canada successfully angled the fish to the boat in 41 minutes for a healthy release. Twenty minutes later in the same area another Blue Marlin came up behind the stinger line and swam with it for several seconds while we teased it into biting! Terry Green, also from BC successfully released his fish after just 39 minutes.  A great day was had by all. 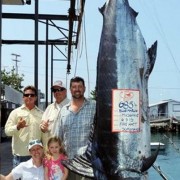