Blog - Latest News
You are here: Home / A Break From Alaska 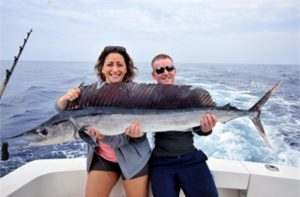 Monica and James Lavell with their 40 pound Short Bill Spearfish

A break from Alaska finds this charming couple their largest fish ever!  James and Monica Lavell were on a delayed Honeymoon here in Kona Hawaii.  It was their first trip to the Islands.  The couple live in Eagle River, AK where James is a Operating Room Nurse and Monica is an ICU Nurse.  While charter fishing in Kona Hawaii aboard Fire Hatt, they were hoping to catch anything!  That anything turned out to be a  nice 40 pound Short Bill Spearfish!   James said “It all happened so fast!”  Captains Joe Schumaker and Brian Schumaker had James swiftly  in the chair and fighting the fish in a matter of seconds.  With Monica cheering him on, he brought the Spearfish to the boat in just under 15 minutes.  Fishing in Kona Hawaii was sure to hold a lot memories for this couple.  Hope to see them again on another break from Alaska and have Monica get her biggest fish too!

Shortbill spearfish are commonly known as Hebi in Hawaii. Its dorsal fin is shorter than that of other billfish species, and its bill is very short in comparison. Hebi caught in Hawaiian waters are usually between 20 and 40 pounds in weight.

Hebi has white to pink colored flesh that is somewhat softer than that of Nairagi or Kajiki. Its flavor is mild (although more pronounced than ahi). It is one of several species of billfish, which are suitable for grilled or broiled “catch of the day” menu items in restaurants. 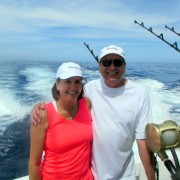 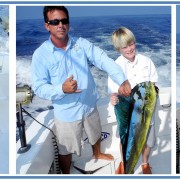 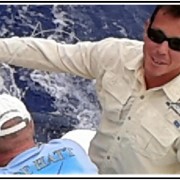 Oh So Close, It was a little painful, but worth every moment!
Scroll to top